The Kiev Aviation Institute was established in 1933. Institute consisted of three faculties:  Aircraftbuilding,  Motorbuilding, and Operational. In the same year, the Aircraft  Engines department was established at the Motorbuilding Faculty. The department was headed by M.G.Gorchakov,  who was the rector of the Kiev Aviation Institute. At that time professors V.V. Sineutsky,  A.P. Lange, associate professor M.I. Kononchuk, who received this title in 24 years old for his scientific work “Rotational oscillations of the piston engine crankshafts”, teachers A.A. Zinchenko, M.P. Reznik, V.Ya. Shipil, V.M. Braslavsky, R.A. Ozerianskaya, PhD students P.G. Podchasov, M.K. Lutskyi worked at the Aircraft  department. In 1947 P.G.Podchasov became the principal of the Kiev Institute of the Civil Air Fleet and M.K. Lutskyi  became his depute.

The subjects of design and durability, design of aviation piston engines were delivered at the department.

During the Great Patriotic War, the Institute temporarily suspended the training of aviation engineers and was transferred to perform a

special task of training junior aviation specialists for the Air Force. The Institute was moved in Aktyubinsk.

In 1947, the Kiev Aviation Institute was restored with one mechanical faculty and renamed the Kiev Institute of Civil Air  Fleet (KICAF). The department of Aircraft  engines resumed its work in 1949.

Owing to the active work of the head of the department A. A. Zinchenko, associate professor V. Ya. Shipil  and teachers D. S. Plishko, A. A. Buzykin, Yu. S. Lichnitskyi the study rooms were equipped with posters of modern at that time domestic and foreign aircraft piston engines, laboratory facilities for studying of engine working processes as well as to determine the quality of aviation fuels and lubricants.мастильних матеріалів.

A significant impetus to the development of the department was the transition of civil aviation to jet technology. Therefore, the main directions of scientific activity of the personnel of the department were the question of the durability of high-loaded components of the GTD, the problem of improving the aerodynamic perfection of the elements of the compressor and turbine flowing ducts.

In 1958 to impruve the efficiency of scientific development, the formation of lecture courses and the development of a laboratory base, the Department of Aircraft  engines was divided into two departments: Structures and Strength of Aeroengines  and Theory of Aviation Engines. The head of department of Structures and Strength of Aeroengines was Associate Professor Ph.D. A.A. Zinchenko. The Theory of Aviation Engines department was headed by Associate Professor, Ph.D. Yu.I. Shvets.

In 1963 the Department of Structure and Strength of Aeroengines was headed by L. P. Lozitsky, who defended his Ph.D. thesis in 1961. The appointment of a young, energetic scientist became a good stimulus for active development of scientific activities of the department.

By that time, only L. P. Lozitskii, A. A. Zinchenko and V. Ya. Shipil had a scientific degree of Candidate of technical sciences at the Department of Structure and Strength of Aeroengines . Young professionals,  high achievers  in study, graduates of Mechanical faculty of KICAF  V.F. Lapshov, B.Ya. Kudryashov, V.O. Pulyaevskii, I.I. Gvozdetsky, A.M. Vetrov, M. O. Koveshnikov, M.M. Osintsev, as well as graduates of the Kiev Higher Engineering Aviation Military School A.K.Yanko, E.M.Karpov, V.O. Konev, and  a graduate of KhAI A.K. Ipatov   were enrolled in the Department of Structure and Strength of Aeroengines since 1961 upto 1968.

In 1964 active scientific work on the study of thermal fatigue of materials under conditions of complex operational loads began on the Department of Structures and Strength of Aeroengines, it contributed to the training of scientific personnel for the department, for the institute and the industry as a whole. Since 1967 the department has been training high-quality teaching staff. In 1967 lecturer A.O. Ivanenko in 1970 teacher M.O. Molochkov defended Ph.D. thesis.

In 1972, L. P. Lozitsky defended his doctoral thesis and received the professor rank. At that time, the Department of Structures and Strength of Aeroengines already had 6 associate professors, candidates of technical sciences.

In the middle of 70’s at the Department of Structures and Strength of Aeroengines, an applied-research scientific  laboratory (ARSL-2) was formed, the staff of which worked on the problems of durability and reliability of aeroengines, as well as the development of methods for diagnosing and controlling the technical conditions of the gas turbine engines (GTE). The scientific leader of the laboratory was professor L.P. Lozitsky, and executive head was Ph.D. A.V. Tarasenko.

The laboratory base of the Theory of Aviation Engines (TAE) department made it possible to carry out scientific and laboratory studies of the working process of GTE on full-scale engine units, which allowed to maintain a high level of training of aviation specialists.

The first scientific work of the Department of Aviation Engine Theory was the study of cooling processes of gas turbine disks. Based on these studies teacher V. S. Rusakov defended his Ph.D. thesis. Sufficiently thorough studies of the gas dynamics of turbine blades became the basis of Yu.I. Shvets` theses for the degree of doctor of technical sciences. Substantial work in this direction was performed by senior lecturer G. Y. Kupchik.

From 1971 to 1974 the Department of Aviation Engine Theory was headed by professor O.M. Govorov, who was  a disciple of academician B.S. Stechkin.  At the same time, a joint efforts of the Department of Aviation Engine Theory and Design and Strength of Aeroengines the reconstruction of a motor-test station (MTS) was carried out. Due to this efforts gas-dynamic stands for testing engines TG-16 and AI-25 were  installed and put into operation.

The development and installation of stands was performed by the staff of the department: engineers 0.0. Gorkavenko, F.V.Safonov, B.A.Bondarenko, A.V.Mikhaylenko, N.I. Shpakovich. In 1975, the Department of Aviation Engine Theory was headed by Associate Professor A.K. Yanko. At that time, a considerable amount of work was being done on the design and manufacture of laboratory facilities for scientific research.

Since 1978, after the establishment of the an applied-research scientific laboratory (ARSL)  headed by Ph.D. Gatushkin O.E. the topic of research was directed to the development of theoretical bases and practical recommendations for the implementation of advanced methods of technical operation of aviation GTE. To perform these works, a three-box motor-test station and an experimental laboratory with bench equipment for various purposes were implemented.

One of the areas of research was related to the flushing of the air-gas path of the GTE to stabilize its gas-dynamic parameters. This work was performed under the guidance of Associate Professor G.Ya. Kupchik. According to the materials of these researches, three PhD theses were defended (A.I. Rodak, V.B. Gorbanovskii and postgraduate student from Algeria Krim Abderrazak).

In the middle of 70’s at the Department of Structures and Strength of Aeroengines, an applied-research scientific   laboratory (ARSL-2) was formed, the staff of which worked on the problems of durability and reliability of aeroengines, as well as the development of methods for diagnosing and controling the technical conditions of the gas turbine engines (GTE). The scientific leader of the laboratory was professor L.P. Lozitsky, and executive head was Ph.D. A.V. Tarasenko.

Further development of this research area was facilitated by the defense of doctoral dissertations by associate professors V.F. Lapshov and A.M. Vetrov , that were defended, accordingly in 1987 and 1990.

In 1991 the department was headed by Doctor of science ,  professor A.M. Vetrov that was  a disciple of professor L.P.Lozitsky . At that time, the Department of Aeroengines was the largest among the special departments of the Aerospace Institute.

To date, the material base of the department consists of 14 study rooms, equipped with models of modern aircraft GTE and piston engines, two training laboratories of motor-test stations, experimental boxes with complex of diagnostic equipment for troubleshooting of full-size  running engines.

At the Department of Aviation Engines, great attention has always been paid to the training of scientific personnel both for the needs of the department itself and for the industry as a whole. Since its foundation, 13 Doctor of science thesis and 53 PhD theses have been prepared and defended at the Aeroengines department and at the department of Theory of aircraft engines. 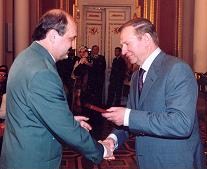 the award “Honored Worker of Science and Technology of Ukraine”.