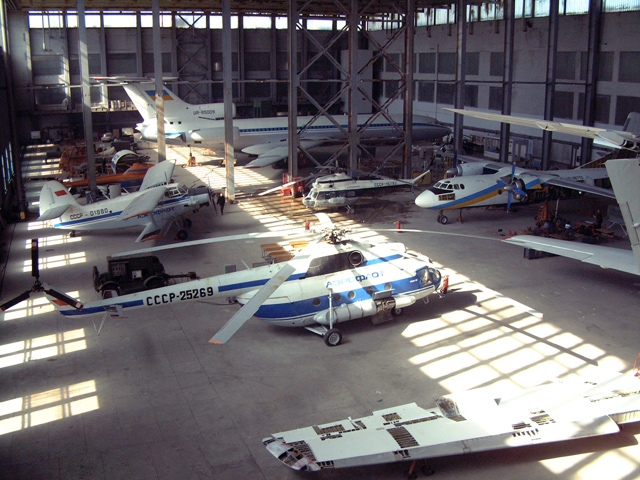 In the National aviation university (NAU) during all period of his existence dominant conception of preparation of aviation specialists was introduction in the educational process of modern scientific achievements, and also creation and use of educational layouts and standards of aerotechics (PROPULSION MODULE) that is exploited in the companies of civil aviation and industry, it separate details, knots and construction elements. All of it was arrived at by combination of educational and scientific work, help and attention of the state to the problems of preparation of highly skilled specialists of high technology of aviation industry.
The example of realization of such conception is an educational-scientific base of department of construction of aircrafts of the Aerospace institute of NAU. For quality preparation of aviation engineers the unique is used after the possibilities and filling the Aviation educational hangarages (АEH).
By the decision of Ministry of civil aviation of the USSR on the base of the National aviation university was built and handed over in exploitation in 1982 year the “Aviation educational hangarages”. An object was built on the special, individual project, with the aim of recreation of the real air field under a roof for preparation of highly skilled aviation specialists.
Building of АEH has an unique construction of roof with the strained membrane of farms (an analogue is building of sport complex “Olympic”, Moscow), that gave possibility to provide a considerable real-estate for a location in it real to propulsion MODULE (7200 sq. m. (120 m×of 60 м), at the height of apartment of 22,5 м). The apartment of АEH is equipped by the powerful electric networks of industrial and special aviation currents (27 At direct-current, 208 In, 400 Hertzs – variable), by general power over 200 Квт.
The aircrafts  of wide spectrum of structural charts, different periods of development and exploitation are placed in АEH. It is airplanes: АН- 24, Ту- 154, Як- 42, Л- 410, АН- 2; helicopters: Мі- 8, Мі- 2 (2 шт), Мі- 4, Ка- 26. The aviation turbo-engines of Д-20П are separately presented, НК-12МВ, НК-8-2у. All aircraft is prepared (have cuts), that gives possibility of more effective mastering of difficult educational material from the construction of propulsion MODULE.
Airplanes and helicopters that is located in АEH are capable of working, prepared, adapted to the educational process and have a surface technological equipment that gives an opportunity to fitting for be what zone of aircraft with the aim of working off and тренажу of repair and regulation works in educational, scientific and productive aims.
In hangarages the located is specialized educational classes, what propulsion MODULES equipped by aggregates, by stands from the study of the basic functional systems of aircraft, systems mounted from the real structural elements. Two classes have the autonomous heating that gives an opportunity to conduct employment in a winter period.

The special attention is spared to history of development constructing of propulsion MODULE, that are the necessary constituent of educational process of preparation of aviation specialists. The unique is located in АEH, one of the first in the world solid-metal airplane of construction of А.М. Туполєва in 1929 to producing of АНТ- 7 (an only copy is in the world), and also unique collection of aviation engines of beginning of past century : “РОН” (in 1913), М- 11 (in 1927), М- 17 (in 1936).
Except aircraft the educational standards of the real technique that provides technical maintenance of propulsion MODULE on earth are located in АEH. It is a complex of the surface special technique : УПГ- 400 (hydraulic pump station), PARMAS (movable airrepair workshops), aggregate apartment of the special currents.
On the base of Educational to the hangarages for years his exploitation got education and about 250 thousand aviation specialists promoted the professional level from Ukraine, former soviet union countries, countries of East Європи, Asia, Africa, Latin America.