Kyiv Aviation Institute (KAI) was established in 1933 on the basis of Aviation Faculty of Kyiv Polytechnic Institute. In the same year, the Department of Details of Machine and Applied Mechanics was created. The Department was headed by doctor of technical sciences, professor V.F. Shultz. Such doctors of technical sciences worked that time at the Department: prof. S.E. Serensen (later a corresponding member of Academy of Science of Ukrainian SSR), assistants M.I. Cherniak, M.S.  Broide, M.I. Afanasyev, S.E. Garf, M.S. Krolevets.

The institute included 4 laboratories, 10 offices, 20 auditoriums, a library with a book fund of 15647 units, a dining room, and a medical unit at the first academic year. 898 people were enrolled for all courses of 4 faculties (Exploitative. Machine-building, Aircraft construction and surface structure), and 142 students of them were admitted to the first year of studding. The flight detachment was organized in 1933 in the Institute and it included seven “U-2” and two “P-4” planes.

In 1933 the Institute employed 11 professors, 17 associate professors and 27 assistants. Academicians of the Academy of Sciences of Ukraine M.F. Kravchuk, S.V. Serensen, I.Ya. Steierman worked at the Institute.

In June, 1941, the KAI was evacuated at first to Kharkiv, and then to Aktobe (Kazakhstan). The 46-th training and technical squadron of the training center of junior aviation specialists was organized on the basis of the Institute. Since 1943, the squadron had been transformed into the School of Technical Stuffs of the Training Center by order of the Chief of General Directorate of the Training Center, which functioned in Chardzhou until April 1944.

In 1947, the Kyiv Aviation Institute was restored with only Mechanical faculty and received a new name “Kyiv Institute of Civil Air Fleet”.

In 1958 a separate Department of Theory of Mechanisms and Machines and Details of Machine (TMM and DM) was created, which was headed by candidate of technical sciences, associate prof. O.V. Karlashov, who later became a doctor of technical sciences, a professor, a Honored Worker of Science and Technology of Ukraine and a winner of State Prize of Ukraine. Several years later, three sections (Theory of Mechanisms and Machines, Details of Machine, and Technical Mechanics) were created at the Department, and were headed by associate professors Y.M. Pryakhin, M.V. Raiko, L.S. Heifets. Directed by them, the training laboratories were created. P.P. Ivanets (he worked at the institute from 1933 to 2000; he held the position of vice-rector of institute for administrative and business work), engineers A.A. Shulzhenko, V.M. Zhukov, P.Y. Kravchenko, V.С. Kudryavtsev participated actively in the creation and equipping of laboratories with the necessary training and laboratory equipment. After that O.V. Sozonenko, M.F. Kozlov, A.M. Pryhod’ko performed considerable work in the supporting of academic activities, in the laboratory equipment preserving and in the educational and methodological developments printing.

Since 1961, the studding and methodological developments and textbooks of department teachers have started publishing. For over 40 years, more than 80 works have been published. The greatest contribution to the studding and methodical literature development was made by prof. O.V. Karlashov, prof. M.V. Reiko, prof. A.A. Tsimbalyuk, assoc. professors Y.M. Pryakhin, L.S. Kheyfets, V.P. Kadomsky, N.M. Gudim-Levkovich, A.P. Batov, M.F. Voronkin, V.M. Pavlov, Yu.I. Linnik, G.M. Borosenetz, O.V. Golubnichy and E.M. Babenko. For many years, Skripkina Z.M. was performing a great work of printing and the manufacture of calcium for the studding and methodical literature developments, scientific papers and scientific and technical reports, candidate and doctoral dissertations.

In 1964, the All-Union Council of the Theory of Mechanisms and Machines under the heading of prominent scientists in this field Academician of the USSR Academy of Sciences I.I. Artobolyevsky and Corresponding Member of the Academy of Sciences of Ukraine S.M. Kozhevnikov was conducted.

Along with the studding and methodical work the research work was also actively conducted at the department. In 1964 the scientific laboratories of physical-and-chemical mechanics of aviation materials and constructions (scientific adviser O. Karlashov, who defended his doctoral dissertation in 1967) and of friction and lubrication of machine details processes research (scientific adviser M.V. Raiko, who defended his doctoral dissertation in 1975) were created. As a result of research in these laboratories, 3 doctoral and 25 candidate’s dissertations were defended. Materials of scientific research were reported at many international, all-union, republican and field symposiums and conferences. The most significant research results were published in more than 250 scientific papers.

The widespread recognition was obtained by researches carried out at the request of aviation enterprises and the Ministry of Civil Aviation of the USSR. Among these studies should be distinguished scientific developments performed in the sectoral research laboratory number 4 of the department for the introduction of new technological processes and materials into the practice of aircraft construction together with the Antonov ASTC and awarded in 1985 by the State Prize of Ukraine. The winners of the State Prize of Ukraine were O.V. Karlashov, G.M. Borosenets, A.D. Hnatyuk, A.B. Kardash.

In January 2001 there was an association of TMM and DM and Technologies for the Repair and Production of Aircraft and Aviation Material Science departments. The department was named “Deaprtment of Mechanical Engineering”. The department was headed by doctor of technical sciences, prof. I.P. Bilokur. 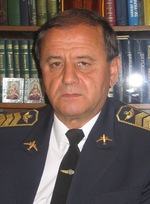 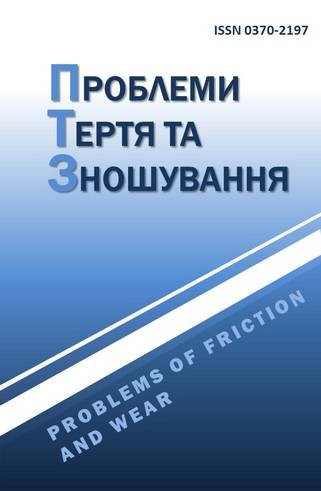 Since 2002, the Department of Mechanical Engineering is graduating. The department teaches specialists of the 3rd accreditation level of specialty 152 “Quality, standardization and certification”.

In April 2003, according to the reorganization of the structural subdivisions of the University and in accordance with the decision of University Academic Council, the department “Techniques for the Reconstruction of Aviation Engineering” was separated from the Department of Mechanical Engineering.

Since October 2004, the department has been headed by doctor of technical sciences, professor M.V. Kindrachuk.

After this, a new stage of scientific active work of tribology school at the department has begun. Since 2006 at the department the publication of scientific and technical collection (from 2013 journal) “Problems of friction and wear” (the editor-in-chief – M.V. Kindrachuk, the responsible secretary – A.O. Kornienko) has been restored, which is included in the list of professional editions of Ukraine and is the Ukrainian leading journal in the field of tribology. During 2006 – 2019 the numbers from the 45th to the 82nd were issued. By 2019, the magazine has been a part of the science-metric databases EBSCO, Google Scholar, WorldCat, Russian Science Citation Index, Index Copernicus and Crossref.

Within the scientific field the researches by the graduate students and young scientists are performed at the Department. An associate professor of the department A.O. Kornienko awarded the President of Ukraine Prize for the young scientists for the work “Development of nanocomposite gradient coatings of tribological application” in 2011, and an assistant of the Department O. Tisov awarded the Parliament of Ukraine Premium for the most talented young scientists in the field of basic and applied research for the work “Formation of tribotechnical properties of bandage shelves GTC turbine blades with Co-TiC composite alloys” in 2012.

In 2016 the head of the Department M.V. Kindrachuk as a member of scientific group became the Laureate of State Prize of Ukraine in the field of science and technology for the work “Creation and introduction of a new class of eutectic composite materials in innovative technologies of mechanical engineering enterprises”.

On 7th March 2018 M.V. Kindrachuk was elected as a corresponding member of the National Academy of Sciences of Ukraine in the Division of Physical and Technical Problems of Material Science.